Dzibilchaltún Ruinas, located about 15 km north of Mérida, Yucatan, Mexico, and accessible by car or taxi, is one of the lesser known and lightly visited Mayan ruins on the Yucatan Peninsula. Nonetheless it may be my favourite —certainly my day spent exploring it and the Cenote Xlakah at its centre were a most enjoyable experience. Dodging the hoards is high on my list of priorities in my travels, and for this reason alone, I found my peaceful wander through these ruins and their bucolic surroundings both fascinating and stress-free. As my mother would have said, I could hear myself think.   (Not the case during my —also fascinating— but highly stressful exploration of Chichen-Itza Ruinas, which crawled with camera-toting tourists, its ancient pathways lined with the dozens of hawkers’ tables which have been allowed to crowd the site of the home of ancient Mayans.) 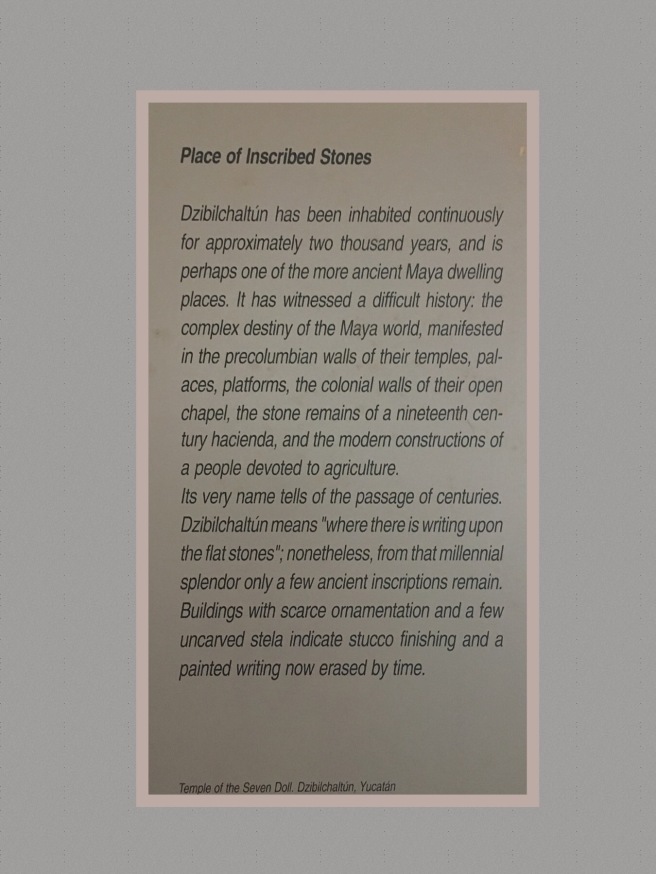 Inside the entrance to the grounds is a museum housing artifacts excavated from the area, maps of the site and offering historical background information.

TEMPLE OF THE SEVEN DOLLS – When it was discovered, inside were found 7 effigies. This temple remains the most famous structure at Dzibilchaltún, its doorways configured in such a way as to be connected with viewing and/or study of the solar system.

The pyramids of Dzibilchaltún are largely overgrown with tree and plant life, giving the site a natural, untrampled beauty and a tranquil, bucolic atmosphere.

Iguana, small and larger, are a common sight at the ruins of the Yucatan. I imagine these sun worshipping creatures to be relishing a sense of ownership of ancient Dzibilchaltún, so few are the intrusions. 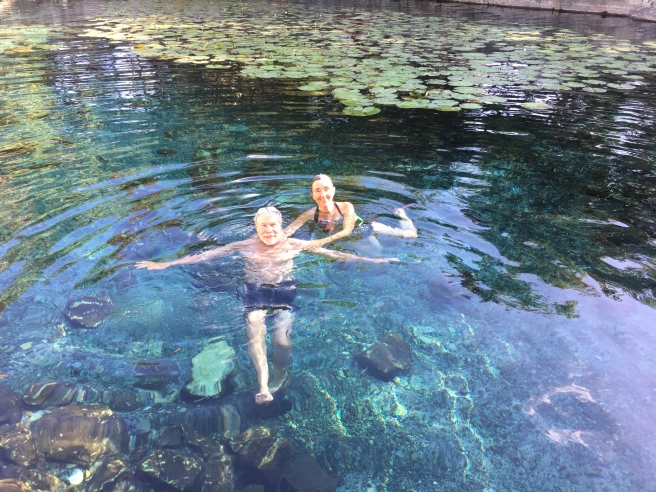 Cenote Xlakah, with cool and transparent turquoise water, is accessible without clambering for hundreds of treacherous metres down underground staircases. Though its waters are known to run deep along underground channels for long distances, a refreshing dip is available at its peaceful surface. Artifacts of human bone and other remains of civilization have been found deep underwater, giving rise to the idea of the cenote’s possible use in sacrificial rituals. Small fish which inhabit the water seem to be oddly without fear of us enormous humans, and a swimmer who remains unmoving in the water is apt to experience the nibbles of tiny fish lips.

A perfect, peaceful day at the Dzibilchaltún ruins capped by a refreshing dip in Cenote Xlakah, although it should be noted that the ruins are in a remote location therefore it will be necessary to call for a taxi to return you to Mérida, or have the gate attendant do so.