Little did I realize when I agreed to spending 3.5 months in Victoria’s lovely Cadboro Bay neighbourhood with Charlie the dachshund, just exactly how single-minded and specific in his tastes and daily requirements this little dog would prove to be. Let’s just say Charlie knows his mind and is not to be easily disuaded when focussed on a particular outcome, despite the dignified manner in which he makes his requests.

There were a few issues Charlie needed to straighten us out on right off the bat:

1) Walking is for chumps — and only will occur after a large amount of obsequious begging from his humans, with —on occasion— an additional incentive in the form of an edible treat. And, if it’s raining? Forget it — no deal at all!  “I’m good”, he will insist with his stubborn stance, “don’t even have to go — nope!”, as he burrows deeply under his blankets.

2) Those mini-stairs that are exactly the height of the rather lofty master bed? His! For mounting to his carefully selected sleeping spot, with undivided attention to settling in (crosswise) before anyone else gets there. 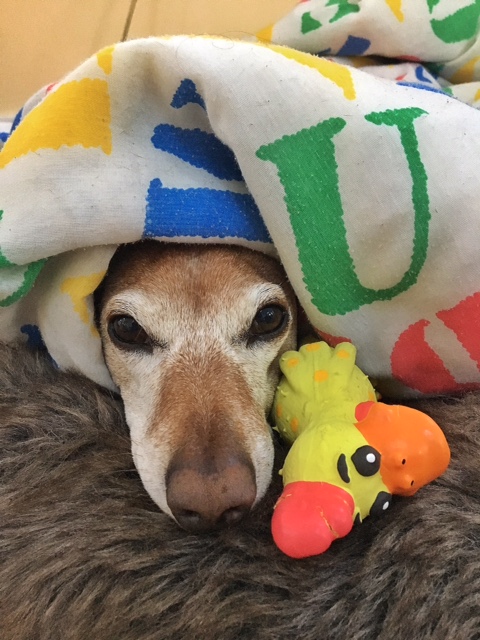 Charlie astonished me with his uncanny ability to transform a plain, flat blanket into a nesting cocoon, all with only four 3” legs and one long snout.

3) A rousing game of his choice is required at least once a day, preferably several times — depending, of course, on his mood and energy level. Always involving a toy (new at least once a week & his to destroy just as promptly as he wishes), a kong (stuffed with delicious treats) for the finding, or hide’n’seek with one of his humans. 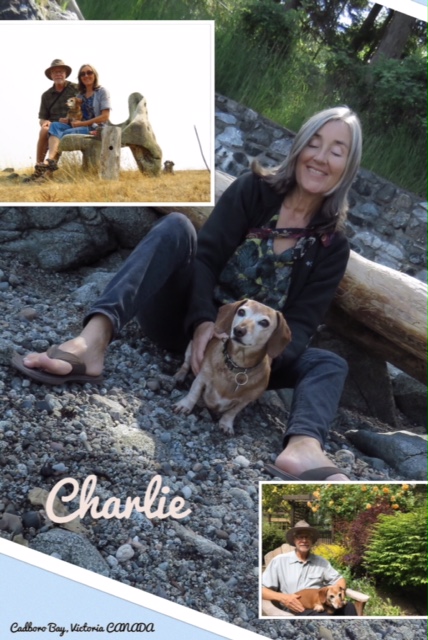 4) Fresh raw vegetables and fruit are a daily requirement, preferably carrots, asparagus and apples, but he is willing to try some new exotic delicacies also.

Who knew that one little dog — very little actually — could require such high maintenance!?  Once he had us trained though, I will say things went very smoothly — just as long as we did the bidding of  Sir Charles, Little Mister Chas, Mr C, Chollie, The C-Man, Charrie, ChaChee, Ch-ch-ch-Charlie, John Charley Corn, Charlemagne (hard ‘Ch’) …

And, despite the plethora of playful nicknames that our Charlie sported while in our care, when he came into my dreams at night (and he did) he was always wearing a tux, waistcoat, bowtie, top hat and monacle. It is just the kind of gentleman he is.

Lucky enough to be in Cadboro Bay during Dogwood Blossom season