Mérida, Mexico, city of almost 800,000 inhabitants, within travel range of a veritable feast of cultural treats to be experienced by both visitors and locals. From Mayan ruins, museums, colonial Spanish architecture to the most local of neighbourhood sights and festivities, there is so much to inspire and stimulate all the senses. We spent three weeks in November/December on the edge of the el Centro historic neighbourhood, and were kept busy seeing and experiencing only a fraction of what the city and area has to offer. It is easy to see why so many choose to make this vibrant city their home. Through photos and words I will give you a glimpse of our time in beautiful Mérida.

Stained glass, metal grillwork, rock structures, arched doorways and windows — all a part of the daily life in Mérida, whether in churches or colonial buildings housing businesses or museums. 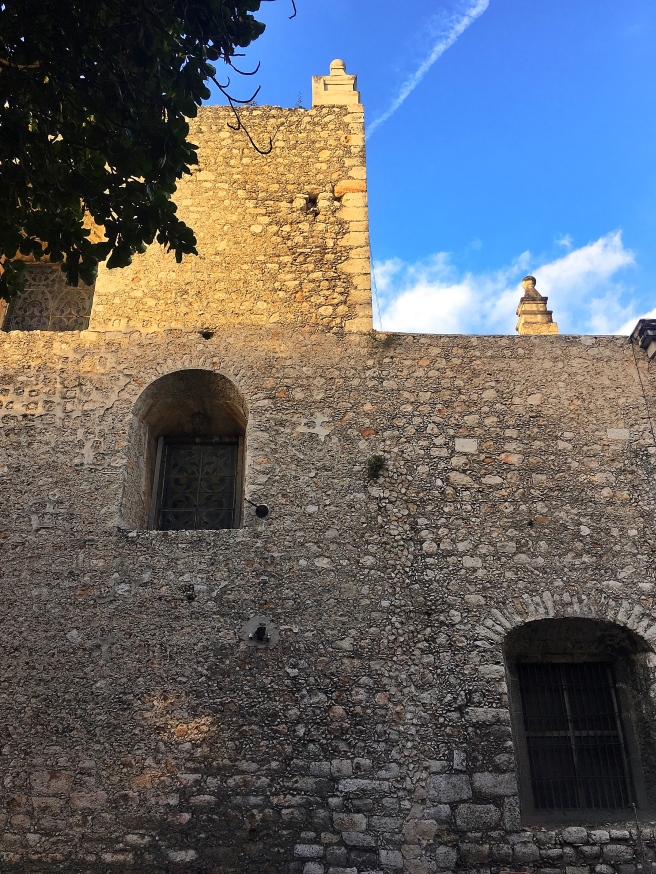 The public square, an integral part of Mexican social life and culture, with the long green wooden benches that are plentiful in each square. Mexicans really know how to make people come out and join together! A frequent lament in my Asian travels —-a pining for a place to rest, to people watch, to interact with strangers and friends. Specific to this area are the white ‘conversation chairs’, two seats in an S shape, designed to make the sitters able to easily carry on conversation with one another. Fantastic! And of course the green spaces everywhere — palms abound along with other tropical plantlife.

Not to be left out is how animal life fits into the fabric of the city. The tourist trade of horse and carriage tours around town is a ubiquitous sight, and the sound of trotting feet is frequently heard. These apparently well-trained horses can be sometimes seen pulling 6 or more tourists. They appear to be well-fed in comparison to their Nicaraguan relatives who do the same work with rakishly bulging ribcages. We declined to support the trade which, though a boon of sorts for the Mexican economy, seems to me to be too much to require of these small horses.

This pregnant looking girl caught my eye with her sad and hopeless expression. Thankfully things have changed quite dramatically for dogs in Mexico since my first visit in 1978, when it was common to find a box of abandoned pups in an alley, and the streets were plentiful with hungry, and rapidly reproducing dogs, as well as cats though fewer in number. Not only have programs been set up to give vet care and sterilization to stray animals, many Mexicans today are pet owners who feed and care for their pets, making sure they get medical attention when needed.

Our neighbourhood pub 😉, La Negrita, seems to be a bouncing establishment, though I did not investigate for myself. The pink-shirted fellows outside seemed to be soliciting passing pedestrians into the bar.

We did spend time in our neighbourhood church, Santa Ana, in meditation — despite my ambiguous feelings about the religious icons that were abundant. There was something refreshingly inclusive about knowing I was ‘worshipping’ in my own way alongside others worshipping in their own way, and that our ways, though polar opposites, were meant to arrive at the same outcomes — tolerance, compassion, love — all the good stuff.

I found myself delighted by the architecture that sprang up in homes near our neighbourhood in Mérida in the last century. The many round cornered homes and businesses attracted my eye on many occasions, in the wonderful way they were designed as though to fit organically into the surroundings. 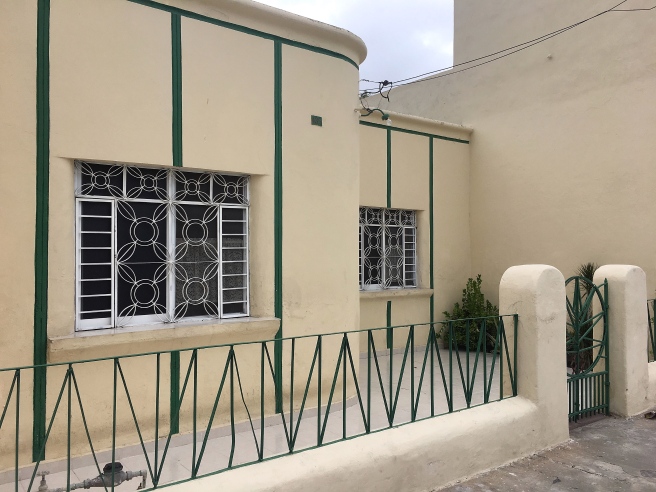 We took the opportunity during our time in Mérida to explore the Grand Museo del Mundo Maya, the Museum of Anthropology, a funky little old train museum and many area ruins (which will be separately detailed at this site).

Below is an example of the type of statue to be seen in the Museum of Anthropology, a depiction of the birth of a child. How utterly simple and obvious — the Mayans of centuries ago did not mince words, at least not in their graphic depictions.

The tapestry below is found in the Museo del Mundo Maya, and is a relatively modern depiction of critical daily life events. Again, the simple purpose and graphically obvious approach to art/documentation is displayed in this charming piece of fibre art.

While wandering one afternoon to outlying neighbourhoods, we stumbled across a rarely visited train museum. Though we arrived after the posted closing time of 2 pm, the managers were happy to accept our donation in exchange for a tour. Ancient and decrepit train cars were lined up for our exploration, along with posters and explanatory panels. Below I am seen investigating one such out of use carriage. (Photo by Aaron White) 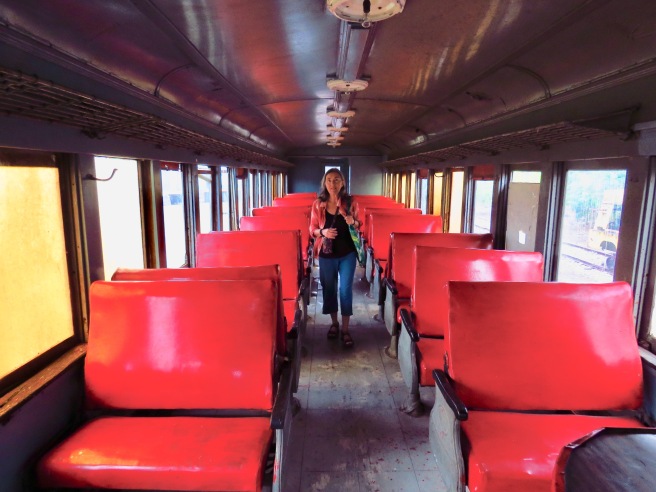 In our three weeks in Mérida, we spent hours just walking the streets of the city, discovering its corners and quirks. We found the people of the city both welcoming and friendly, generous in their patience with our stumbling Spanish, and always wanting to help. The one down side to life in el Centro was the motorized traffic. The toxic exhaust fumes, the noisy, roaring engines and the high danger to any pedestrian who dare consider that he or she might have a right of way over motorized traffic, was a constant stress to me when on the main streets.

Aaron is seen below navigating the narrow and uneven sidewalk as an enormous bus roars at top speed past his shoulder, a common occurrence. In the other photo is an oddly modern and attractive structure that was posted as being a community-use venue, anomalously modern beside its ancient siblings.

Since we were there during ‘the season’ we attended Noche Blanca, a huge night of celebration and festivities which kicks off the Christmas season. It was enormous fun to watch Mexican families enjoying their holiday traditions. From December 8th on we saw many displays of Christmas lights as we wandered the streets in the evening. 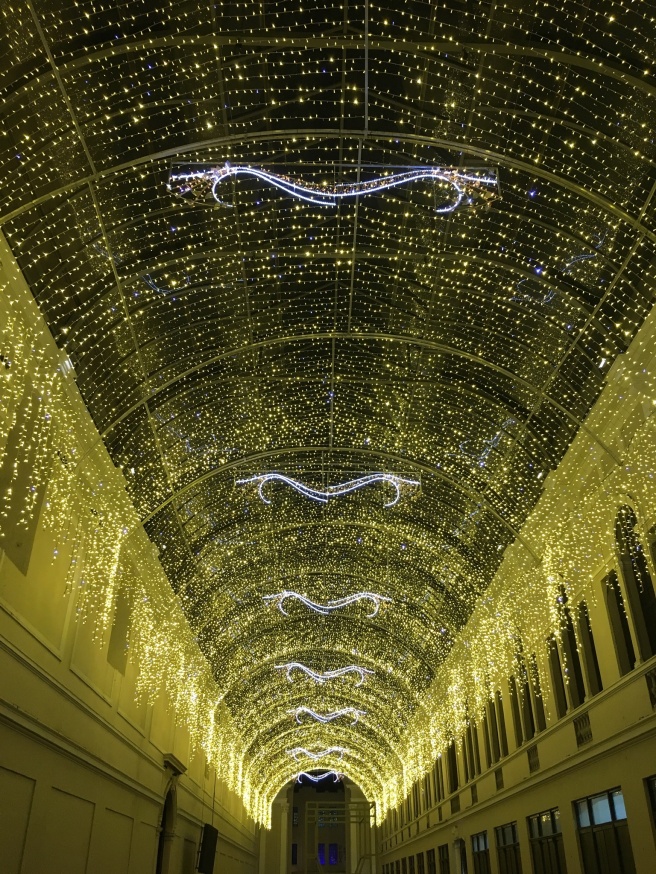 Espresso ~ lots of excellent espresso to be found — we even found a new stove top espresso maker to purchase when ours died (pricey but nothing is worse for us than not being able to make good coffee at home!)

Regional Food ~ we enjoyed the regional Yucatan foods and haven’t one photo to share though we can say it was possible to get a variety of both vegetarian and meat dishes {on a general topic, the cafe near the Saturday Slow Market (expat land) has fabulous enchiladas verde!}

Non-Regional food ~ I hate to tell you this but there is a Krispy Kreme outlet if you find yourself in the throws of craving, though I had one delicioso chocolate croissant from a panadería and would recommend trying that instead (when in Rome…. or Mexico).

For photos and descriptions of our ruinas and cenote day trips during our Mérida visit, stay posted. Not to be overlooked was our fabulous day to view flamingoes in the wild, presented in a (rudimentary, yes) video here. Hasta luego, amigas y amigos!